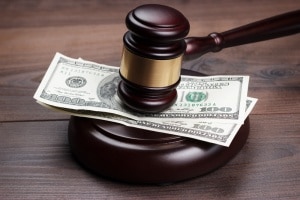 If you are getting a North Carolina bail bond for yourself or someone you love, one of your big questions is likely, “Is bail money refundable?” This is a common question, since bailing someone out of jail is so costly. But there is no straight answer because there are multiple factors involved.

Bail money is your assurance to the court that you or the charged individual will show up for hearings as required. It is similar to putting up collateral for a loan. For the courts to let someone out of jail pending trial, they need assurance that the individual will not run away from their responsibilities. Without this system, too few people would go to court as they should.

There are sometimes conditions applied to bailing out of jail. A good example is the judge requiring the defendant to forfeit their passport. Other requirements can include:

When you meet all of the requirements the judge puts forth, you get the bail money back, minus fees. If you do not meet the conditions of your bail, the court can keep all of your bail money and you will go back to jail to await your trial.

When you cannot afford to pay to get out of jail, your alternative is to get a North Carolina bail bond. Also called a surety bond, this arrangement with a bail bondsman gives you the money you cannot otherwise come up with to meet bail requirements.

In exchange for this bond, you pay the bail bondsman a deposit. This is typically up to 15 percent of the bail money ordered by the court. In some cases, your bondsman may loan the deposit amount on which you will make payments throughout your case. You can also sometimes arrange to use collateral.

It is important to note that bail bonds are not refundable. But you do not have to pay the total bond amount to get out of jail. The court does refund the bond to the bonding agency when you meet the court’s conditions. This is how a bail bonds agency makes money. In essence, you are paying them for the service of getting you out of jail when you cannot otherwise afford to do so.

What to Do When You Face Criminal Charges in NC

If you are facing criminal charges in North Carolina and the judge grants you bail, you have a personal decision to make. That is, do you stay in jail to await your trial? Or, do you get out of jail on bail to prepare your case and maintain your outside responsibilities? For most people, the easy answer is paying the bail money, whether from personal funds or a bail bond.

Contact DJ’s Bail Bonds anytime, 24 hours per day and seven days per week, to learn more about the bail bond process and how to pay the bail money for your case. You can reach us at 919-986-1547.