In America, the right to own a firearm is directly linked to the freedom that the Constitution gives us. See not so long-ago Americans lived in a time where defending against those who would see to take advantage of not only their home but the lives of those that dwelled within them was as real as you picking up your cell phone and logging on to Facebook. A firearm are not something you want to have without a license in your vehicle.

Even owning a hunting rifle or shotgun is a real concern when police make a traffic stop. Now it may be argued that the laws on obtaining a firearm are relaxed but the laws while caring a firearm. Also, the punishment for abusing said laws are no laughing matter.

That is why the information that you will find here is so important. Especially if you would like to avoid ending up in handcuffs. 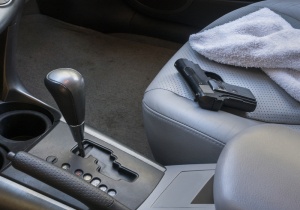 This is as basic, as it is intelligent. The second the words “ Do You Know Why I Pulled You Over” comes out of the mouth of the officer. You should immediately state “ Officer Before We Begin I Would Like to Inform You That I Do Have A Weapon in the Car”.

Another great way of letting the officer know that a gun is present in the vehicle is to not say a thing and just hand over both your license and your Concealed Weapons Permit at the same time.

This establishes that you were not trying to hide the fact that there a gun in the car. And that until proven otherwise, that you legally own the gun in the car. This would, of course, be verified when the officer asks to see your license with your concealed weapons permit if you didn’t already hand it to him.

The things you say play a very important part in a smooth traffic stop. Remember to say WEAPON and not GUN. A veteran of the force will have a state of alertness but not nervousness if you say GUN but a Rookie fresh out of the academy might hear GUN and become hyper-alert.
Should you not establish that you do have a weapon in the car and the officer notices it, the amount of tension between you and the officer has now multiplied exponentially. This increase in tension can and has led to fatal interaction between the Police and Civilians. So, let the Cop know your packing.

Keep Both Hands on the Steering Wheel.

Keeping both hands on the steering wheel is another great way of letting the officer know that you are in no way a threat. This is a good rule of thumb with all traffic stops. Keeping your hands visible keeps the cop calm and you safe.

Let the Officer Know Where the Gun is.

It’s always a good idea to let the officer know the location of the gun. Usually, a gun is kept in the glove compartment or in the center console of the vehicle. However, some drivers prefer other locations of the car that are more readily available. This is often the case for business owners making bank drops for the night. It has large amounts of cash on their person or a driver that has a Highline vehicle and values the right to protect themselves and their personal property. Letting the officer know where the gun is and avoiding movements to that area will, of course, keep the traffic stop smooth and safe.

Should I Be Worried If the Gun Is on My Person?

Now every state has different laws about concealing your weapon in your car. That’s why it’s good to make sure you are fully aware of the laws in your state about keeping your gun stored in your vehicle.

But if you let the officer know where the gun was in the car, then even if it’s on your person this is a fundamental way to keep the traffic stop routine.

What If I Am Arrested with My Gun in The Car or On Me.

First things first, KEEP YOUR MOUTH SHUT and use the right to remain silent. If you do speak, do so in a calm and intelligent manner, no slang, or insults. Let the officers run through their playbook and do their duty. Running your mouth in an aggressive manner is definitely not going to help the issue.

Make sure you are taking note of everything happening. You might be scared but don’t allow that fear to get you into even more trouble by not observing what the officers are doing. This might be useful to you later on when you consult a lawyer.

Just remember that you are an American. and have rights but that those rights don’t allow you to dig an even deeper hole for yourself.

After everything is said and done IMMEDIATELY Call DJ’s Bail Bonds. To help you get out of jail and where you need to be, so you can prepare yourself for arraignment.

With multiple locations all over North Carolina, you can be sure that DJ’S Bail Bonds. Will be there where you need them when you need them. And that you can trust that they have the experience and staff that will know just what to do.